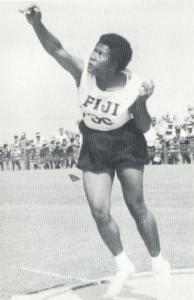 Merewai Vesikula, as she was known during her competitive years, was born on 23rd June 1938, in Nadroga. She moved to Suva in 1955 to pursue her studies in medical profession.

For Merewai the opportunity to compete at the regional or international level came a bit late in her sporting career. The Inaugural South Pacific Games was in 1963 when she was almost past her prime. She was however competing regularly around the country at club level and dominating the field events.

The first opportunity for regional competition for Merewai was the 1963 South Pacific Games. She competed in shot put, discus and javelin and was successful in winning the fold medal in each of the events. She again represented Fiji in the 1966 South Pacific Games, but because of a nagging knee injury she was only able to win a silver medal in discus.

On 25 April 1964, Merewai established a Fiji record in shot put with a throw of 13.11m. This record still stands at the time of her induction.

Merewai Vesikula has the distinction and the honour of winning the first gold medal at the South Pacific Games.

Earlier this year Merewai participated in the Oceania Veterans Athletics Championships. She participated and won the gold in shot put and silver in javelin.

Having retired from her nursing career Merewai now lives in Suva with her husband and 3 children.