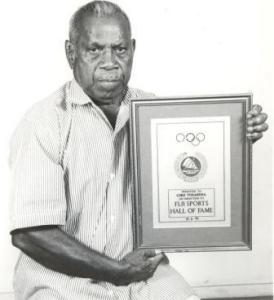 Luke Tunabuna wrote his name in the history books of Fiji Athletics, when in the 1950 Commonwealth Games in Auckland, New Zealand he won a silver medal in the javelin with a throw of 56.02m. In doing so he broke the previous record which was set by Ratu Sir Kamisese Mara in Dusseldorf in August 1947.

Representing Fiji in the Canterbury Centennial Games in Christchurch, New Zealand in 1950 he won the javelin event with a throw of 184 feet 8 1/2 inches.

With Luke Tunabuna retired from active sports in 1954 he held the Fiji record of 59.14m which he has achieved in Palmertston North in the New Zealand Championships in February 1950.