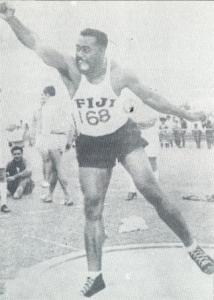 Mesulame Rakuro became Fiji’s first Olympic Track and Field athlete when he represented the country in the 1956 Games in Melbourne, Australia.

Perhaps, the highlight of his many superlative performances was at White City in London. In a Great Britain versus the Commonwealth match, after the Cardiff Commonwealth Games in 1958, Mesulame Rakuro hurled the discuss 51.84m to take the silver medal.

He also represented Fiji in the 1954 Vancouver and 1958 Cardiff Britsh Empire Games.

Mesulame was invited to compete in the Malaysian Championships in 1957 where he won a gold medal in shot put.

Mesulame Rakuro, who collapsed and died at his home in Drasa, Lautoka in 1969 at the age of 38, at the time of his induction he holds the national discuss record of 51.81m, which he created in 1958.