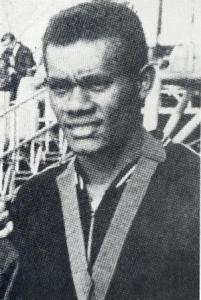 That is how Fiji Times of 25 July 1970 described the performance of Saimoni Tamani, the lone Fiji Track and Field athlete to the 1970 Commonwealth Games in Edinburgh, where he won a bronze medal in the 400m in the time of 45.82 seconds.

Due to injury this great Fijian athlete, who hails from Bua, had to retire at his prime in 1971.

He now lives with his family in the State of Washington on the West Coast of the United States of America.