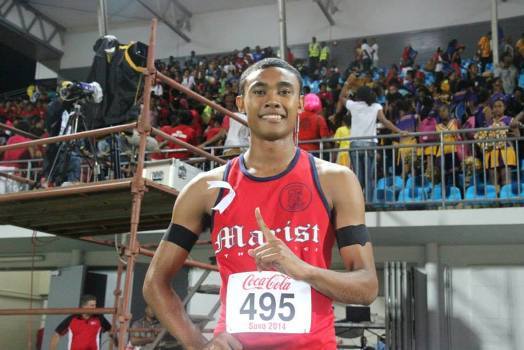 Fiji is more familiar with his twin sister Elenoa Sailosi, but what most people do not know is that Soni, as he is more commonly known, has been a fairly influential athlete in the Fiji Athletics Family. He’s first ever national athletics competition was the 2005 Primary School Milo Games Athletics Championship where he participated for Suva in the U10 boys 50m and 75m. Soni’s strong suite wasn’t the individual races but the relays. He was on numerous Marist Brothers’ High School relay champion teams from 2009 till 2013 while on the other hand, his sister Noa was in the limelight for her stellar performances in the sprints while representing ACS. However in 2014, while both Noa and Soni were in their senior year of high school, it would Soni that would steal the spotlight from his twin sister after winning the blue ribbon event at the Coke Games. Soni’s first ever individual medal and victory while representing the red brigade from Kaunikuila. Traditionally a 400m and 4x400m relay specialist, Soni graced the 100m straight with his farness running style and humble demeanor to edge out underdog athletes from the outer islands, a victory no one saw coming. Soni turned a liking for the short sprints and has since focused on the 100m and 200m while toying with the 400m, 4x400m relay and even the 400m hurdles. He ran a wind aided 10.71s in the 100m at the 2015 Regional Oceania Championships but still has a legal lifetime best of 10.90s which he ran at the 2014 Coca Cola Games in Suva. In 2015 Soni switched to the 400m hurdles seeing that Fiji lacked runners in that event at the Pacific Games, fairly new to the event, Soni ran a lifetime best of 56.22s at the 2015 Regional Oceania Championships and finished 7th at the 2015 SPG 400m hurdles final in a time of 56.49s.