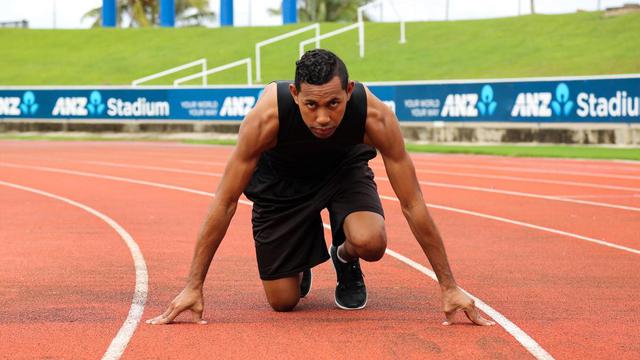 “I’m doing this because I know I can do it and I’d like to prove everyone wrong” these were the words of Qamea, Taveuni native Errol Qaqa when he had decided to make a full commitment to athletics after two failed attempts at making the national team for the 2011 and 2015 Pacific Games. The basketball player turned hurdler draws most of his inspiration from the sheer determination that he sees in Para-athletes who train at the track day in and day out despite their disability, what fuels this fire of his as well is the doubts that most people have in him. Errol is no stranger to athletics, he’s first ever competitive athletics competition was the 2002 Milo Games where he ran in the U10 grade for Suva in the 50m. He had no inclination of taking up the sport and because of the LDS background from which he was brought up in, Errol turned a liking for basketball and did not take part in any athletics competition until 2003 where he set a new Sub-Junior Boys’ High Jump record at the Suva Zone 1 competition. A record which stood for 2 years till it was broken by another student from LDS which, ironically Errol helped coach. From 2003 to 2006 Errol made appearances at the Coke games representing LDS in the high jump only to have fallen short of the medal dice time and time again but this did not matter as basketball took front and center stage in his sporting priorities. Then in 2007 Errol moved over to Pacific Island neighbors Tonga where he was first introduced to the high hurdles, an event that Errol would take an immediate liking for after he won a bronze medal in a local competition. In 2009 he moved back to Fiji to finish off his high school 7th form education and to his dismay there wasn’t any hurdles at the Coke Games so athletics was once again put on the back burner and basketball given the ultimate attention. The following year he made it in the Fiji U20 Men’s Basketball team then in 2011 he tried out for the Pacific Games attending most of the Pacific Games trials battling it out with No. 5 Fiji All Time 110m Hurdler John Wainiqolo however due to other commitments, Errol wasn’t able to attend the rest of the Pacific Games trials. He also was a trials for the 2015 Pacific Games but again failed to make the team then his break came at the 2016 Melanesian Championships where he fully committed to training and competition and not only did he make the national team but won gold in the open men’s 110m hurdles in a personal best time of 15.54s, a time that earned him the 10th best all time 110m hurdler in the history of the event in Fiji.