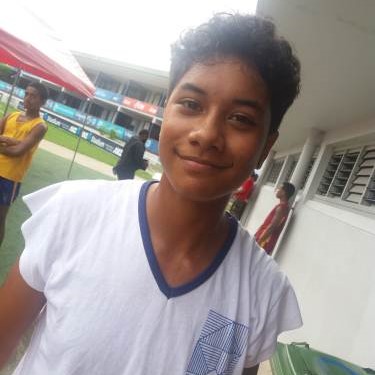 St. Joseph’s Secondary School, although not a force to reckon with come the Coca Cola Games, have had their fair share of the limelight with standout female sprinters which tend to add to the drama of the Coke Games by breasting the finishing line ahead of athletics giant schools like Jasper Williams and Adi Cakobau. Some of these sprinters include Racheal Rodgers, Tahitia Kamea, Sisilia Seavula and the more recent Heleina Young. Heleina’s been given the title of Road Runner by her school mates and with her quick and nimble strides; she’s been known to leave everyone in her wake in the first 40m. An ability which she uses so well on the hockey turf as she had made it into the Fiji Women’s Junior Hockey team that participated at the OPC in 2014. The dual sport athlete made her first international debut in athletics at the 2015 Ligue De Nouvelle Caledonie D’Athletisme in New Caledonia where she finished 3rd in the Open Women’s 100m final in a time of 12.98s. Amidst her stellar performance at the Oceania Area Championships and an unlikely win in the 400m at the 2017 Coke Games Finals, the hockey player turned athletics rep clocked a very impressive new personal best of 11.87s in the final of the Intermediate Girls’ 100m finals. A performance that has tied her for second place with former pacific sprint queen Vaciseva Tavaga in the All-Time list. She’s also ranked number 2 in the 400m in Fiji in 2018 after only taking up the event a year ago. Nevertheless, the quarter mile gave her stamina which in turned fused well with her natural speed, she also clocked an impressive 24.33s in the finals of the 200m at the Coke Games. Making her the 3rd fastest female 200m runner in Fiji All-Time behind Makelesi Bulikiobo and vaciseva Tavaga.

One thought on “HELEINA YOUNG”