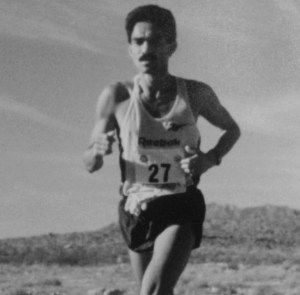 Binesh is a legend in the middle and long distance 5,000m, 10,000m, half marathon and marathon, running of Fiji. He is the only athlete that has participated and won medals for Fiji, at regional competitions, from 4x400meters to the Marathon as well as being the only Fiji athlete to have won a Gold Medal in marathon, at any (major) Pacific Games.

Binesh still holds National Fiji Records for Marathon and Half-Marathon. The marathon record of 2:23.3s is still almost 10 minutes faster than any other person in Fiji and has stood for 24 years since 1989. His half-marathon record of 1:07.6s has stood since 1993.

He was a great influence and inspiration, through his achievements and persona to the running boom in Fiji, during the 1980’s and 1990’s. He was one of the three founders of the Striders Athletic Club that challenged the status quo and the stereotyped sporting systems in Fiji. The club, went on to organise its own events and fundraising – the Sun Striders Road Series, Round Viti Levu Relays, Round Ovalau Relay and the Hibiscus Mile, to name a few.

The great successes of Athletics Fiji, in reversing the domination of New Caledonia and Papua New Guinea was largely due to tremendous courage, desire, determination, commitment, leadership and vision of two athletes Binesh Prasad and compatriot Semi Vuetibau. (no success story of Binesh Prasad will be complete without Semi Vuetibau, as the two were inseparable on and off the competition arena).

Binesh was a mentor and example to other younger athletes. He hosted athletes from out of town at his house in Suva at his own expense and later Fiji teams to international meets at his residence in USA, sometimes for very long periods of time.

Binesh was popular with all the stakeholders in FIJI and a great ambassador for Fiji in the regional and international world. Binesh is married to another running legend, Nadia Prasad (nee Bernard), who was the Pacific’s all-time leading middle and long–distance athlete. . Binesh is currently, one of the top massage therapists in the world, living in the running Mecca of the world – Boulder Colorado, where he continues to spread the culture and information on the attractions of Fiji.

Since retiring from competitive running, Binesh helped coach his wife to the 1996 Olympics and a French National record for the Half Marathon at 1hr 9 minutes and 5 seconds. He also coaches the high school track team in Longmont, Colorado.

Binesh Prasad has been and will always be a great asset and ambassador for FIJI. FASANOC was proud to induct BINESH PRASAD into the Fiji Sports Hall of Fame for the year 2013.