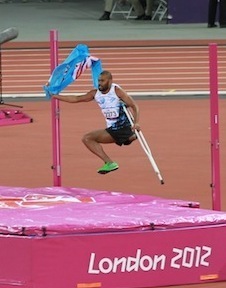 This young sportsman qualifies in every category of criteria for the Fiji Hall of Fame award that states to be eligible for nomination an athlete must:

His international and regional achievements are very impressive and include winning:

Although not retired from his sport, Iliesa has, by his sheer performance achieved international status and recognition in his sport, Class F42 (single leg amputee without prosthesis) High Jump. In 2011, his Silver Medal win in the International Paralympic Committee’s World Championships in Christchurch, New Zealand, earned him not only a No. 2 ranking in the world but also qualified him for participation at the 2012 London Paralympic Games.

It set the stage for Iliesa’s debut at a Paralympic Games and there was none better than London 2012 for him to step into the limelight.

Iliesa is a humble man who has worked hard and tirelessly to achieve excellence. As a role model for all Fijians and a light of hope for those with disabilities while exemplifying the highest human qualities FASANOC is delighted to induct Digicel’s Ambassador Iliesa Delana into the Fiji Sports Hall of Fame for his exceptional performance at the 2012 Paralympic Games.