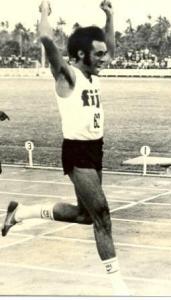 Joseph Rodan first represented Fiji in Athletics at a South Pacific Games in Guam in 1975 and continued representation for sixteen years at the following South Pacific and Mini Games.

For his success at the 1983 SPG in Apia in winning 2 Gold Medals in the 400m and 400m Hurdles Joseph was nominated and won the prestigious Fiji Sportsman of the Year award.

Upon retiring from competition this athlete turned to coaching and has accompanied Athletic Teams to the 1997 SPG in American Samoa, 1998 Commonwealth Games in Kuala Lumpur, 1999 SPG in Guam, Sydney 2000 Olympic Games, 2002 Commonwealth Games in Manchester and the successful Athletics Team at this years SPG in Suva.